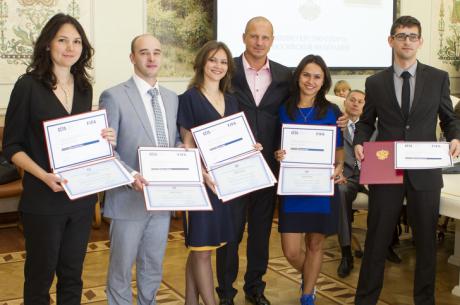 During a meeting held on 14 January 2016 at FIFA headquarters in Zurich, an international jury consisting of representatives from FIFA, CIES and academia awarded the 2016 FIFA/CIES International University Network Prize to five students from the Higher School of Economics (HSE) in Moscow (Russia).

After lengthy discussions due to the difficulty of  making  a final decision  from  the 14 submitted projects, the jury decided to award the 2016 FIFA/CIES Network Prize to the work presented by Olga Laeva, Elena Bortnichek, Daria Smirnova, Lev Fertelmeyster and Maksim Shipov. The five winning students are from  the first edition of the HSE/FIFA/CIES Programme in sport management, and their work is on “The 360º Academy: Development of a sports academy educational model”. Their  project aims to improve the sports education system in Russia by creating a school model focused on sport which proposes solutions to allow the harmonious and balanced development of  athletes.

The jury members pointed out numerous strengths in the project, and in particular its strong academic dimension and theoretical framework. They also appreciated the fact that it has  already been implemented in the Russian sporting world.

In addition, , the jury has awarded a  special  mention  to the project “Green Goal: Sustainability in Football” which was submitted by  Warren Hartland and Maximilian S. Grünewald, - two students from Nelson Mandela Metropolitan University (NMMU) in Port Elizabeth (South Africa). Their  project explores  the possibility of  using  a football stadium in order to provide a local community with lighting. Its sustainable dimension should become a model for further research.

The jury members underlined the continuing and pleasing improvement in the quality of the submitted projects. Consequently, they would like to thank all the universities and all the students of the FIFA/CIES Network for their excellent work.

In this respect, CIES General Secretary Vincent Schatzmann commented: “The Network Prize creates healthy competition among the various partner universities. We can see that the students’ involvement and the quality of the group projects have developed in a positive way from year to year. The topics are varied. They range from improvement of managerial structures to environmental challenges facing sport or to data processing applications related to security. By analysing tangible problems and by providing practical and realistic solutions, project groups contribute to a relevant reflection on sport at national level.”

FIFA and CIES offer their congratulations to the prizewinning students!

Created in 2011, following a proposal made by the Universidad Católica Argentina, the Prize acknowledges the best group project developed within the FIFA/CIES Programme in sport management. The prize-winners will now have the opportunity to travel to Switzerland and visit FIFA’s “House of Football”, the CIES headquarters in Neuchâtel and to present their work to the FIFA Master students.