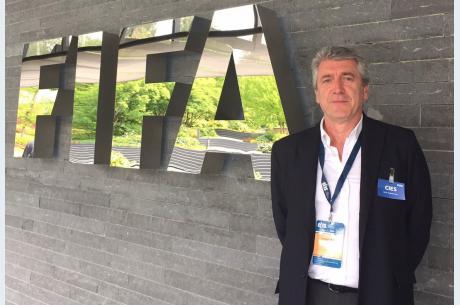 Francisco Rubio is one of the people who has contributed to the organisation of the FIFA/CIES International Programme in Spain, of which he has been one of the Directors since 2010. A lawyer specialising in sports and labour law, he has just been appointed FIFA Mediator. Here he talks to us about his new responsibilities.

You were recently appointed FIFA Mediator. What does this appointment mean to you?

This is a very important step in my personal, professional and academic life. Indeed, I was one of the founding members of the Spanish Institute of Mediation and Pacification of Sport (IEMEDEP). Since 2017, I have dedicated part of my activity to the prevention and alternative resolution of conflicts in sport.

As head of training at IEMEDEP, which is an institution officially recognised by the Spanish Ministry of Justice, we have contributed to the professional qualification of sports mediators from several countries. I am happy to work now with other mediators from different continents, who will try to bring different perspectives and working methods to the field of football.

What are your first impressions?

In addition to my work as IEMEDEP Mediator and, more recently, as CAS Mediator, I am very pleased and motivated to take on my new responsibilities as FIFA Mediator in the context of the ambitious regulatory and organisational restructuring of the Football Tribunal being carried out by the legal department of that federation.

In this case, I will have to share my knowledge and experience in mediation to resolve the many conflicts that arise in football at national and international level.

For example, mediation can be useful in disputes concerning employment contracts, player loans and transfers, underage players, economic rights, trademark law, development of competitions and events and many other cases.

In addition, it should not be overlooked that mediation can also play a preventive role, as a mechanism of so-called "positive conflict management". Through this, it is possible to take action before a conflict breaks out or a dispute between the parties escalates.

I am sure that this new phase, in which mediators from different countries around the world are ready to contribute to the resolution of the inevitable conflicts that arise between the different parties and players in football, will be a great success.

In a word, I have no doubt that many other sports will join this path initiated by FIFA.

In your opinion, what are the main challenges facing a mediator in sport, and more specifically in football?

The main handicap of mediation is the lack of awareness of its existence or, in other cases, a distorted vision of it. Therefore, one of the first challenges is to make people aware of mediation and its advantages, such as its voluntary nature, confidentiality, procedural flexibility, speed and low cost, compared to other arbitration or judicial mechanisms.

It is very important to know that it is the parties in conflict themselves who, with the help of the mediator, can reach a win-win agreement. In many cases, mediation not only solves the original conflict, but can also help to improve a bad relationship between the parties, especially following the positive outcome of a mediation process.

You are one of the Directors of the FIFA/CIES International Programme organised in Spain with Universidad Rey Juan Carlos and RFEF. Do you plan to share this new experience with the students of the law module?

Yes, of course I do. The study of alternative dispute resolution mechanisms, including mediation, is studied in several themes of the law module.  This is particularly the case in the new law module syllabus, which I have the honour of collaborating on and which is in its final stages of development.

A word about your role as Director of this Programme?

As Director of this Programme in Spain, I am aware that the synergies between staff, teachers and students are the driving force of the training.

"We all have to learn from each other", whether in the classroom, during breaks and in general. The International University Network that CIES and FIFA have developed between hundreds of teachers and thousands of students from all over the world provides an ideal framework for the constant development of learning processes.

In my role as Director, teacher and lecturer at CIES, I try to share my own knowledge and experience, but I also benefit from the input of my colleagues and students. We cannot train ourselves if we are not in a constant state of study, updating, observation of reality, dialogue and debate.